The UK aviation community has recently lost one those rare individuals who possess the gift of enthusing others with their passion, and making easy and achievable what had previously seemed difficult.Ian Marshall was one such individual who touched many, many lives in both general and commercial aviation with his boundless enthusiasm for flying. 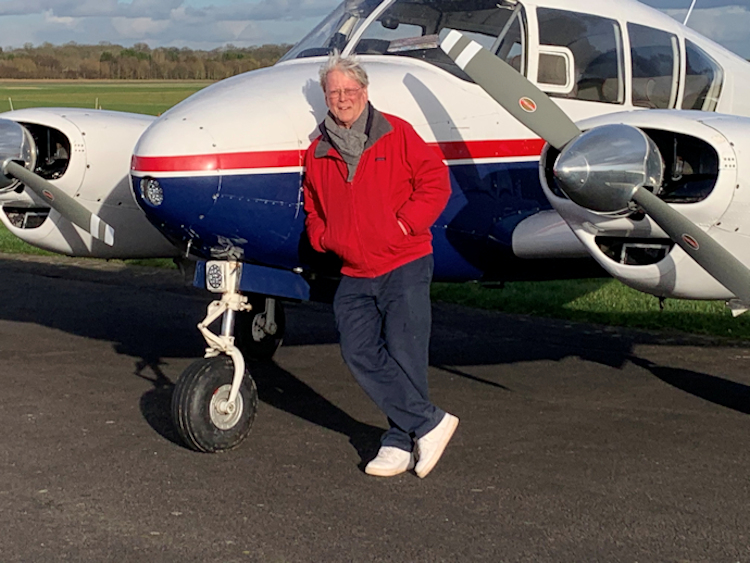 I first met him some 30 years ago when a mutual friend suggested that I join Ian in providing commentary for the Biggin Hill AirFair radio. This was enormous fun and was the start of a lifelong friendship.

Ian was a classic example of pilots known as “self-improvers”. He obtained his PPL in early 1978 at Booker and quickly moved on to gain an instructor’s rating, an instrument rating followed by a multi engine rating, funded by Ian’s work as a sound engineer and then as a radio producer with LBC Radio. Later in his airline career, and during one of the downturns in the aviation industry, Ian returned to part time radio production with Classic FM.

Ian’s first full time aviation work was as demonstration pilot flying the Optica for Edgeley Aircraft, based at Old Sarum. At one stage this involved Ian in checking out Neville Duke, one of his boyhood heroes, on the aircraft.

He built his flying hours making newspaper deliveries to Europe, after which he flew mainly BN Islanders on charter work.

Some flying film work ensued, in a film entitled “Sweet Dreams” in which Jessica Lange played the part of the country and western singer Patsy Cline. This at one time involved Ian being dressed in a blonde wig to double for Jessica Lange.

He then gained an ATPL, moving on to airline flying with London City Airways flying DHC Dash 7s, before moving to Monarch and then joining British Midland International (BMI).

This involved a step up to flying DC9s, Boeing 737s and Airbus A319 / 320 on European and Middle Eastern routes. As well as gaining his command, Ian took on the role of emergency response manager for BMI, becoming a founder member and then chair of the UK Aviation Emergency Planning Group, only standing down earlier this year, long after leaving BMI. During this time a number of people shared trips with Ian to that Mecca of aviation at Oshkosh, leaving wonderful lasting memories.

BMI were later absorbed by British Airways, and at this point Ian decided to leave the airline world to become a full-time flying instructor and to develop his part time emergency response consultancy and training work that had started with BM.

Consultancy work blossomed, with Ian being trained in Post-Crash Management by IATA, the RAF and British Police. He later went on to hold roles as a member of IATA Emergency Planners’ Working group, the Star Alliance Energy Advisory Group and the UK Government Crisis Advisory Group.

He also lectured on the subject at London City and Cranfield Universities and to airlines in Europe and the Middle and Far East.

He continued full time instruction with West London Aero Club at White Waltham as Head of Training, at one time instituting multi engine training. On several successive years, he organised and led hugely enjoyable touring trips with 8 – 10 aircraft to France and Lake Como in Italy. Latterly he took up instructing at Elstree.

Always a supporter of AOPA (UK), he somehow found the time to serve as Chairman of the AOPA (UK)’s Training Committee and for which he also wrote many practical and thought-provoking articles.

If Ian was not instructing, he would be flying one of the aircraft that he owned over the years. He was constantly restlessly looking for “that perfect aircraft”, owning shares in a Cub L4, a Cap10B (in which he gave many their first taste of aerobatics), a Decathlon, a Robin DR 400, a Cirrus SR20, a Piper Cherokee Six, and his last aircraft, a venerable Piper Apache, an aircraft affectionately remembered by many from its days with Hamble College of Air Training.

It was in this aircraft that he was looking forward to retirement and touring with his loving wife Sheila who had always supported and helped Ian in his career.

If all that were not enough, Ian also obtained his PPL(H) in a Hughes 300, and also took up gliding, particularly during holidays in New Zealand, at one time owning a glider for a period.

Ian was a lifelong dog lover, owning a succession of Welsh border collies, each having distinctive personalities.

Despite significant medical challenges, Ian was always cheerful and positive in his views of the world.

In particular my family has cause to be thankful for Ian’s help and support at a time of great personal tragedy.

So, what memories and legacies are we left with?

Ian, you were taken far too early. I shall miss you enormously, but very glad to have known you and benefitted from your knowledge and experience.

With condolences to Ian’s wife, Sheila, and his family and friends.